We had club seats for the Tampa Bay Storm arena football game tonight. I love just about any sport, but football is by far my favorite. But calling arena football REAL football is a stretch. I’ve watched it on television, but never in person.

But they made it a fun event. We had special tickets giving us unlimited food (hamburgers, hotdogs, French fries, potato salad and cole slaw, and warm chocolate chip cookies) and unlimited beer, wine, and soda. I did good on the food. I had one hamburger and 12 French fries and a diet Coke. I really hadn’t eaten much during the day either. I’m still determined to stick with this.

Anyway, the game was fun. And the Storm won!

Plus since it was May 4, it was Star Wars night. We saw all the Star Wars characters throughout. I could ever get a picture of C3PO and didn’t see R2D2 at all. But Darth Vader was there (complete with sound effects). 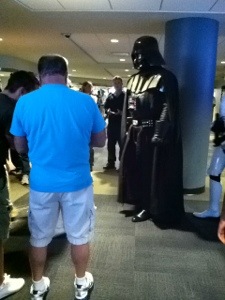 And it wouldn’t be complete without Storm Troopers

But my favorite was Chewbacca. He had fun with me. First he patted me on the head, then he mussed up my hair, then he got a little serious for my photo opp 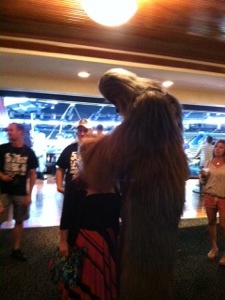 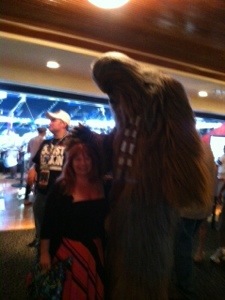 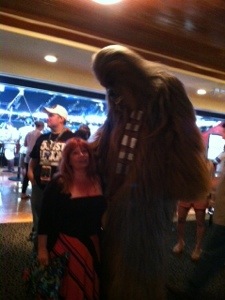 There was even a bit of a parade of them all

And salsa music on the plaza beforehand. Just a fun, fun night. It was a good vacation day.

May the Fourth be with You!